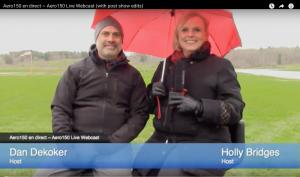 Despite April wind, rain and snow, the show would go on!

In what is believed to have been a Canadian first, this spring I had the pleasure of leading a team of 6 dedicated volunteers (thanks Holly Bridges, Dan Dekoker, Bill Christie, Jonathan Edwards, Kate Costello and Max Lavoie!) as we worked to bring the hosted, live webcast of a complete international air show to fruition. Clocking in with a run time of just under 5 hours, we produced and aired our April 30, 2017 show from the edge of the main taxiway at the Gatineau-Ottawa Executive Airport – the site of the very wet, snowy (and eventually muddy) Aero150 extravaganza. 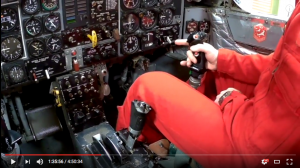 During one of our pre-recorded webcast segments (Chapter 14, below), Snowbird 10 brought viewers into the cockpit of a CT-114 Tutor.

In early May, I took our 720p broadcast file and edited it slightly, removing two copyright-controlled songs which the Canadian and French air demonstration teams had used in their soundtracks and optimizing the content and flow for on-demand viewing. The result is a single, 4:50 long video available for viewing on YouTube, using the easy-viewing guide below – just click on the time entry of the chapter of interest, sit back and enjoy!

Please be sure to share all feedback, suggestions or constructive criticism that might come to you using either the comments area or my “Contact” form, being sure to include the time-frame of the section that you’re commenting about. Of note, we already know that we needed a full-time lens wiper on the skyward-pointed camera #2 – thank you!